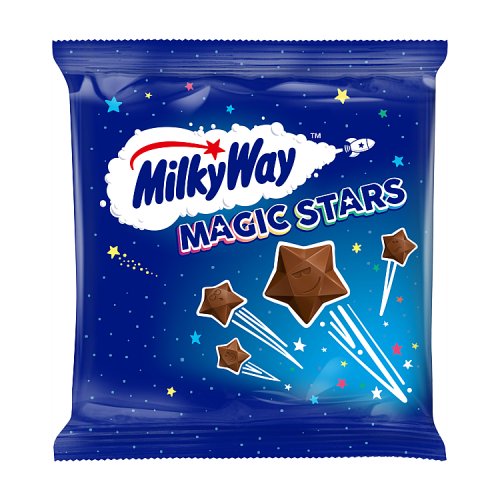 After a Magic Carat show, a teenage boy approaches Emi, and asks for a handshake. He reveals that he's a boxer, and thinks some of her luck will rub off on him and help him win his match.

Mai attends the match with Shou, and she comes to hate boxing after seeing how hurt the competitors get. On the long train ride, they meet a strange woman names Beebee, who claims to be an alien princess, and tells the siblings that the UFO has actually been looking for her.

On the journey back, a sudden electrical storm causes the train to stop indefinitely, and a fight breaks out between some women on the train.

Mai transforms into Emi to try and keep the peace, and manages to catch a glimpse into who Beebee really is: a singer who got stage fright and lost her confidence, giving up on her dream.

As Emi, Mai reminds her that everyone gets stage fright, and encourages her. Later on, Beebee returns to Tokyo to continue chasing her dream, and Toppo reveals that the "UFO" was actually another one of his kind.

Although rising quickly in fame, Magical Emi is a bit of a mystery in the entertainment world, as her secret split identity makes it difficult to get any info on her.

Koganei, not wanting to disappoint his boss, tricks Emi into doing the documentary by lying and saying it's a drama, forcing her to unknowingly show fans a completely dishonest interpretation of her life.

When Emi inevitably finds out, she reluctantly allows the drama to continue, but luckily, Koganei's boss changes the editing to make the documentary about Koganei instead of Emi, allowing her to keep her secrecy.

The troupe takes up the challenge, but are scared off when the ghosts really do appear. As they are running away, Mai trips and hits her head, and when she comes to, she discovers that Uncle Tokuji is behind the "haunting".

Out of anger, Mai promises the workers that Emi will uncover the truth, and sets out the next night followed by a film crew.

After getting past the fake ghosts, Emi asks Tokuji why he would do such a thing, but is stopped short when the fireflies begin to glow around them.

The construction workers decide not to disrupt such a beautiful area, so Tokuji can rest well knowing that his late wife's memory persists in the place she loved.

Due to all her time spent playing around instead of studying, Mai has to rush to complete her summer homework and get her grades up, especially after her father ups the ante by forbidding her from doing magic until she's done.

Mai's mother enlists Shou to tutor her, but Mai becomes restless when she finds out that Magic Carat will lose their TV spot if Emi misses the broadcast.

When Shou leaves, Mai takes her chance to sneak out and transform, assumedly behind his back. However, Shou reveals to Emi that he'd actually advocated for Mai to her father, so that she could attend the show and stop worrying for Magic Carat.

This brings the two a bit closer, and Mai seems to be developing feelings for him. For the first time, Mai is given the chance to do her own solo magic performance at the Big Bang!

After telling Musashi, he turns it into a school-wide event, encouraging everyone to come and support her.

However, when Mai sees the venue, she realizes that she's actually performing on a small, separate set up, and not the Big Bang stage as she'd accidentally led her classmates to believe.

When Mai tries to rectify the misunderstanding, she is unable to, which causes her so much stress that she develops a fever. Her mother decides to take up the set in her place, but Mai has a change of heart, and decides to give it her best after all.

As the town readies for an oncoming typhoon, Mai meets a strange girl in the park, who seems to be able to control the wind!

This mysterious girl, Shelley, is very powerful, but clumsy. Although Mai thinks she's an ordinary girl, Toppo worries that there's something off about her.

On the day the typhoon hits, Shelley comes to the bakery to help out, and Toppo convinces Mai to transform into Emi and speak to her. Shelley reveals to Emi that she's actually a Wind Fairy, who was stranded in the human world due to the fact that she doesn't have enough magical power to return by herself.

Because Emi is scheduled to do live magic in the storm, Shelley asks her to help her return home. After giving Yukiko permission to drive his new car, Kokobunji, Yukiko, Mai and Musashi end up being dangerously stalked by a freight truck due to Yukiko's reckless driving.

Shou and the others try to catch up to them. Mai is excitedly practicing new tricks for the magic contest at the school festival, only to have her hopes dashed when she finds out that Emi is supposed to be judging.

On the other hand, Shou has been tasked with both acting as a date for the boxing club captain's sister, and being Emi's bodyguard.

Not knowing of Mai's split identity, Shou asks her to take his place guiding Emi around the school, which causes some tension when she notices that he's seemingly shirking his responsibility for a date.

A strange young boy shows up at a Magic Carat show, demanding to see Emi. Mai ignores him, but later that day, she sees him again, and the magical mirror starts to sparkle, indicating that the boy might be a fairy.

That night, the boy breaks in to the house where the troupe, Shou, and Mai's grandparent's live, searching for Emi to no avail.

After he's discovered and the ensuing chase to catch him, the boy reveals that he needs Emi to put some magic in a bottle for him. Mai obliges, and the boy runs off, proving once and for all that he's a fairy as he vanishes in a cloud of sparkling light.

When walking home from the store with her grandfather, time seems to stop for Mai when she notices a victorian-doll in an antique store window.

Feeling as if the doll was calling out to her for some reason, Mai decides to purchase it, despite the store clerk's ominous statement that he "wouldn't recommend it".

At home, Mai notices that the doll's reflection in the magical mirror is always crying, and--on her grandfather's advice--she sets out to listen to the doll's heart.

Once we receive your exchange at our facility, we will process and ship your requested item at no additional shipping cost. To see a full list of our most frequently asked questions click here.

Our team will reserve your requested shade for 30 days due to the overwhelming demand of these items, your request is subject to availability and on a first come, first serve basis.

We cannot guarantee every request will be honored! Once you have received written confirmation your requested shade has been reserved, you will have 30 days to ship your concealer back to us.

No return labels will be issued for exchanging a shade.

One exchange per concealer, per order. We suggest using a tracked shipping service in the event our team requests you provide a tracking number, just in case!

Once we receive your exchange at our facility, we will process and ship your requested item at no additional shipping cost.